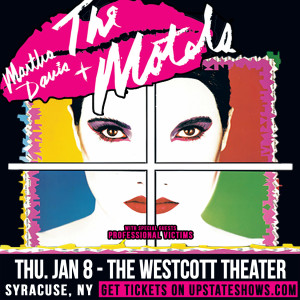 If you get your magnifying glass out you can see we’re on this flyer lol!
Whether you were there when The Motels first burst onto the music scene, or are just discovering them now, 2014 became a year of rediscovery for this iconic artist, which saw more Motels shows than in any year since 1985. Martha began writing songs at the age of 15 and has always known that the songs she writes are her mark. Born and raised in Berkeley, California, she moved to Los Angeles in the early ‘70s, along with the first incarnation of The Motels. The band reformed in 1978 and was immediately signed to Capitol Records.

In 1982, the Motels released “All Four One.” The smash single “Only The Lonely” rocketed into the Top 10, immediately propelling the album to gold status and breaking The Motels wide open in the United States. The group dominated the music scene and was voted Best Performance for “Only The Lonely” at the 1982 American Music Awards.

Her voice is unique, unmistakable and timeless – The Los Angeles Times’ Robert Hilburn called her “arguably the most charismatic female performer in rock.” And about the Hollywood Bowl concert just a few months ago, The Hollywood Reporter wrote, “Martha Davis, of the Motels, was still strong in voice and admirably delivered hits like ‘Only The Lonely’ and ‘Suddenly Last Summer.’”